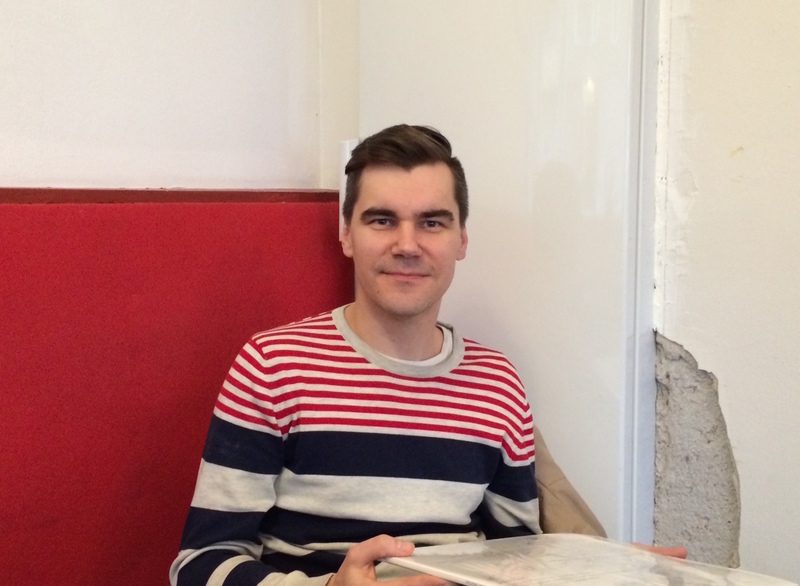 > Give yourself a title, some kind of imaginary title, something unconventional that describes best your role in the organisation?

I am the "soup base" –the main ingredient around which the soup is built. I need to be a catalyst for ideas, spices and other ingredients.

> What kind of animal is your festival and why?

Maybe some of kind of fish because we have to adapt to the temperature around us, even though we always wouldn't want to, to swim against the current, and to overcome many obstacles while doing that. Also because I simply like fish. Our festival is an endangered species just like the salmon. It is difficult to sustain the kind of things we chose to do.

> Why are you doing this and not something else with your life?

Sometimes I ask myself the same question. Initially for the love of music and art, to do something that otherwise would remain undone. But if somebody else would do the same, I would start doing something different. I almost wish somebody would make a copy of this festival so I could do something else because there are so many great interesting ideas to pursue! Also I do it just to be able to experience it myself.

> What was the spark that inspired your festival?

The need to have something that was not there. Just the realisation that it needs to be done and to try and have the courage to do it. It was easier the first time than the second. The spark was stronger for the first edition because everything was new.

> How would you describe your festival to your grand-parents?

They are not here anymore so I can't really answer based on reality...

But an event where everybody can feel welcome. I would invite them over to this sort of new jazz festival. I think they would be interested. It is important to have events which attract audiences across generations and where everybody is welcome.

> What would you have in an organiser's survival kit?

Money, headache pills, the team that is doing this - because it is impossible to do it alone, patience, tolerance of compromise.

> What is one thing that you do wrong?

There might be many things, but one thing is that I want the bands to have good salaries and I should be better at negotiating because when the tickets sales don't go well, then I am in trouble. I should be better at managing the financial risk. I am maybe not a good a negotiator but I hope I have been mostly a good customer to the bands and supported them in what they do. Sometimes I am also horrible with my own deadlines, not keeping them...

> What is your relationship to other similar organisations in your context?

It is difficult to define. Many jazz festivals are much more organised. If we would decide to end We Jazz, it would happen just like that, but nobody couldn't really end Pori Jazz or April Jazz overnight because there would be so much collateral damage to it. We have good relations to other jazz festivals but they operate in a slightly different framework. It would be interesting to collaborate with contemporary performance festivals and events outside of the field of jazz.

We are like a startup without the funding, but in the end Google will not be buying us out for 3 millions...so we are also quite different from a start up business at the end.

> How can one contribute to your festival?

Hopefully in ways I can't even imagine. One is to volunteer. One is to propose an idea we like (like a place to organise a concert etc.). If somebody has an idea and wants to do something which sound interesting to us we always try to make it happen. Maybe the most important thing is to support the event locally: buy the tickets, come and see the bands.

> What is a successful festival according to your own standards?

One that is artistically interesting, challenging and rewarding. Also one that is financially functional. The first part we have achieved, not the second yet. But it is more important to have interesting content. The financial side will develop with the content and the vision.

Woodsits in California (organised by the band Woods)

Viapori Jazz (almost like an older brother of We Jazz...)

> What collaborative tools / interfaces do you use? Do you have your own server? Have you developed your own specific tools?

I would like to have a good mobile app for the event that could provide something deeper than the time and place about each event, but I haven't found the time and the means to work on it yet.

We try and develop new ways to communicate with the audience, like for example in 2014 when we had the concert companion ticket. We will try to work on concepts such as this one further.

Maybe something that can be considered a tool in communication, is to do performance in spaces that are interesting for the artist, like for instance the concert in complete darkness from last year, but can also become a platform for communicating differently with the audience. That is something I want to do a lot more in future.

Mopo24 was also a tool for breaking boundaries with the audience. The band comes to you to give a concert and plays 24 gigs in 24 hours all around Helsinki, so the entry-level for audience was very low, which was great.

> What is the main thing from your festival production you think should be open sourced?

It would be interesting to have a dialogue about a future festival based on this idea of open source, to have conversations with people from other fields. Maybe in the future there should be new models for funding festivals. It should be easier to get funding to try out an idea. The open source aspect should come as an exchange of ideas on how to do it. There could be business angels for the cultural field startups as well...

> Name a problem you have encountered & a practical solution to solve it.

The most concrete problem is how to pay all the bills and the solution right now is to take a loan from the bank. But after that, it is to be continued..!

> How do you envisage having round-the-year impacts? Do you provide anything throughout the year?

We used to have a club series but now it has stopped. We need to think of something else. This year we are concentrating on doing the next festival. Every now and then we do small events with our DJ collective, play music for the people to enjoy. We have also organised workshops with the Sibelius Academy for artists that come to the festival. We had a children's workshop in the first year too. Maybe a workshop around listening to jazz would be interesting.

> How about documentation & archiving? How is this part of your work and how is it distributed?

It is very important to document what happens, because that will never happen again. We document in audio & photographs, and we also have some video material from 2013. Maybe we could open up the archive at some point down the line and make an installation of that.

> What advice would you give to someone who would want to start a festival?

Think about why do the scene and the world would need that kind of an event. If you can't answer this question, don't do it. If you can, do it but learn to take moderate risks so that if something would go wrong it doesn't 'end you'. Because you always have to take a risk to do something interesting.