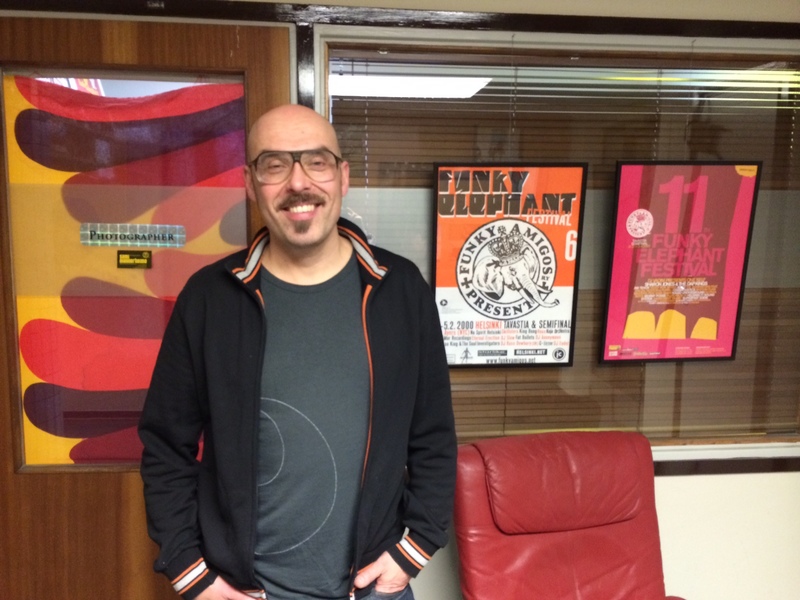 > Give yourself a title, some kind of imaginary title, something unconventional that describes best your role in the organisation?

> What kind of animal is your festival and why?

It is an elephant. It is in the name already. We chose it 20 years ago. The elephant is a very sympathetic animal to me. It is big and strong, and it also associates with stronge rythms. We would like our festival to give an 'animal like' feeling in the sense of creating an atmosphere where people can free their minds and be natural.

> Why are you doing this and not something else with your life?

For me it is a way of living. There are many people involved, so it is a train that is also difficult to stop. There is a great energy in the festival, it has a strong family get-together feeling. Our association is called Funky Amigos, we are friends, and it is an important aspect of the festival too.

Economically though, it does not make any sense. Last year we didn't get salaries. But it's definitely more than just a festival or a job. It is way of living!

> What was the spark that inspired your festival?

It came from Victors, a bar & restaurant for which I was doing the club programme. Even before that I liked funk music. But that is when I started to dig more into it. I met Bruno Maximus, a painter, and we started to think of doing a funk music festival. Victors & Bruno were my big inspirations.

> How would you describe your festival to your grand-parents?

It's a music festival with black rythm music and a multicultural event.

> What would you have in an organiser's survival kit?

A masseur, puerh tea, an extra phone, some extra time (25 hours in a day), some extra boost.

> What is one thing that you do wrong?

I am not systemactic enough and I should think more of how to handle the money side to get things economically working.

> What is your relationship to other similar organisations in your context?

We have been collaborating with several festivals but not on a regular basis. But we have a good relationship with other festivals. We do some ticket exchanges, so that we get free entrance to some festivals and we give them free entrance to our festival. With the Etno Soi festival, we are starting a collaboration. They are bringing one band to Funky Elephant. They are promoting this through their channels and we are promoting their festival.

> How can one contribute to your festival?

We do not have a call for proposals but bands do send us proposals. Same with volunteers, no call cause we have already a lot and it just happens from mouth to ear. We have an idea to develop further the way our association and membership work but we haven't found the time to do it.

> What is a successful festival according to your own standards?

A festival that manages the budget well so it is possible to pay salaries and not end up in minus. A festival is successful when people come because of the festival itself, not only for a certain programme. It is the sign of a strong brand. And when people get something special out of it...

> What is the main thing from your festival production you think should be open sourced?

The warm feeling that we have within the festival team. It helps to create a relaxed event with a good vibe.

Last year we had the problem of having too many people in the production team. Now we have reduced the amount of people to half and try to focus things more. Because it is not like 'the more people the easier'.

> How do you envisage having round-the-year impacts? Do you provide anything throughout the year?

We do have different events like the Elefantasy & Funky awards, as well some club events. During the past two years I have been going to Womex and promoted some Finnish bands there as well.

> How about documentation & archiving? How is this part of your work and how is it distributed?

We have photographers documenting our events. Photos are uploaded to Flickr, Instagram & FB. We have loads of video material from the festival. Our video material has been broadcasted on some small TV channels and once on Yle.

> What advice would you give to someone who would wants to start a festival?

It's good to give a lot of time to the planning and the production. The planning needs to start at least one year before. In Finland there are all kinds of regulations and permissions for outdoor events. One should also think for whom and why one does it.