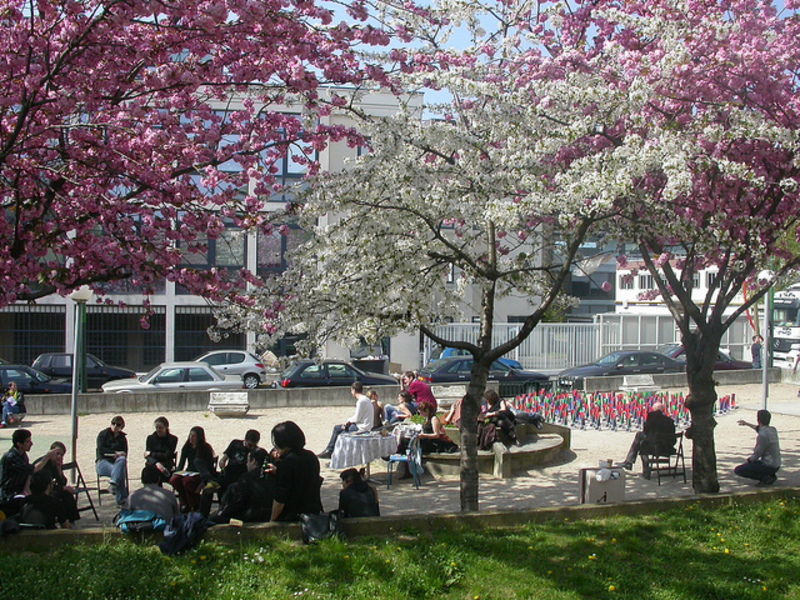 Within the context of Gaîté Lyrique's 'Laboratoire Ouvert', Mal au Pixel and the Pixelache Network has proposed from May 2014 to April 2015, a cycle of open meetings, gatherings and workshops offering critical points of view on current, emerging or future technologies. Artist-researchers have been invited to transmit their know-how during a workshop, in areas such as open source programming, open hardware electronic creation, network protocols, real-time interaction etc. As the closing event of this cycle, Mal au pixel is organising a full week-end of performances, talks and workshops:

Attack me at 2.432 GHz is an audiovisual performance based on the real time sonification of human activities in the electromagnetic spectrum and particularly high frequencies. The massive use of wireless transmissions rises questions about public health and safety, preservation of privacy. In a global surveillance context, while the "Internet  Of Things" movement is spreading worldwide connected objects, our personal datas have never been so exposed. To prevent this, there is the strategy of the attack, the honeypot to attract pests and digital lock-picking skills to open backdoors and build autonomous zones. Possibly encrypted data packets encapsulated in a constellation of standardized protocols, that's all electromagnetic bestaire that revolves around us every day in an invisible but audible world.

Benjamin Cadon is a media artist who lives and works as project manager for Labomedia, a well known independent media lab in Orleans, France. He's been active in several other sound art organisations and develops audio-visual performances and installations using open source real-time softwares and electronic devices. Working partly on improvisation and partly on physical principles, his goal is the construction/deconstruction of concepts threw images, sounds, situations, in the questioning of the relation between society, media and biological worlds which surround us.

The Pirate Cinema is based on a data interception software. It reveals, through a simple diversion, different aspects of exchange platforms, such as the global and multi-situated nature of Peer-to-Peer networks (P2P), the potential for viral transmission, and alternative social models. Its purpose is to make available for aesthetic exploration the pre-existing potentials of Peer-to-Peer architectures.

The live performance of TPC relies on an automated system that downloads a selection of torrent files (movies, mp3) selected by the performer. This system is an instrument in itself, producing specific temporal and formal structures, from parameters defined by the performer. The performance lasts the amount of time required to download a group of files. The choice of the downloaded files may be related to the local or actual context. (Place, local cultural context, political, economic, etc.)

Nb: Downloading Torrents is not a linear process. Completion of a file is done in a disorderly manner, and according to an irregular rate. Which leads, in the context of this project to a rearrangement of the full temporal continuity of initial video and sounds.

Nicolas Maigret exposes the internal workings of media, through an exploration of their dysfunctions, limitations or failure thresholds which he develops sensory and immersive audio visual experiences. As a curator, he initiated the disnovation.net research, a critique of the innovation propaganda. He teaches at Parsons Paris and cofounded the Art of Failure collective in 2006.

Jake Harries : Spam lifts us up where we belong, up where eagles fly, on a mountain high

« Spam lifts us up where we belong, up where eagles fly, on a mountain high ». Everyone is provided with spam emails for free every single day of their lives. Instead of being grateful most people are annoyed. This is a short but bewildering masterclass on how to sing spam, why you might want to, and how it can change your life. No eagles will be harmed during the performance.

Jake Harries : Jake is Creative Producer at Access Space, and has developed and run the arts programme there since 2007. He is an artist, musician, composer, performer and has been making music in Sheffield since the 1980s. Much of his current practice is based around using spam emails as raw material for composition and performing, including Silicone Bake, a spam and Livecoding collaboration with Alex McLean. He was a member of electronic funk band Chakk which is best known for building Sheffield's first large recording studio, FON Studios, in the mid 1980s, and he has been one of “freestyle techno” and chill-out pioneers Heights of Abraham since 1991 .

Andrew Gryf Paterson (b. 1974) is a Scottish artist-organiser, educator, cultural producer, and independent researcher, based in Strasbourg, France.

Owen Kelly : Lecturer, artist, and writer. Particularly interested in ways of drawing technology out of machinery and into people's daily lives, in ways that free them to step into the world. Where entertainment and learning meet is where I want to be, and since they increasingly meet almost everywhere that leaves me a lot of places to choose from. I am coming to the end of doctoral research that involves exploring the possibilities inherent in immersive pedagogy. I am currently engaged in compiling seven years of research and experimentation into a thesis.

Susanne Palzer is a cross-disciplinary artist, researcher and performer based in Sheffield, UK.

World Brain – Gwenola Wagon, Stéphane Degoutin : World Brain proposes a stroll through motley folkloric tales : data centers, animal magnetism, the Internet as a myth, the inner lives of rats, how to gather a network of researchers in the forest, how to survive in the wild using Wikipedia, how to connect cats and stones… The world we live in often resembles a Borgesian story. Indeed, if one wanted to write a sequel to Borges’ Fictions, he could do it simply by putting together press articles.  The World Brain is made out mostly of found materials : videos downloaded on Youtube, images, scientific or pseudo scientific reports, news feeds… http://worldbrain.arte.tv/

Gwenola Wagon is an artist and professor in the Art Department of the Université de Paris 8 since 2008. Graduate of the Ecole Nationale Supérieure des Arts Décoratifs, Paris and of the Atelier de Recherches Interactives, she is currently a researcher on the FDM (Formes de la Mobilité) of the TEAMeD (Théorie Expérimentation Arts Médias et Design) project within the EnsadLab. She received a PhD on the Utopias of Interctive cinema. She is co-founder with Alexis Chazard of the artist's group Cela Étant. She co-founded the project Nogo Voyages with Stéphane Degoutin in 2007 as well as the project LOPH in 2011. She has produced numerous sound and moving image installations in France and abroad including Blackpool Manchester, Globodrome, Hypnorama, le Musée de l’imaginaire terroriste, Discothèque sauvage, Mute, and Cyborgs dans la brume. She was recently curator of the exhibition, Voyages dans les données du monde, at the Rencontres de la photographie, Marseille 2013.

Stéphane Degoutin : Artist, writer and professor at the École Nationale Supérieure des Arts Décoratifs (Paris). Researcher at the LATTS (École des Ponts Paris Tech) laboratory. Co-founder of the projects Nogo voyages and LOPH. His research questions the notion of humanity after Man, the city after public space, architecture after pleasure, the Umwelt of data. He has produced numerous video installations, film works and sound pieces exhibited in France and abroad.

Philippe Vasset (born 1972) In 2003, Vasset published his first book entitled Exemplaire de demonstration published by Fayard. His Un Livre blanc, published in 2007, tells the story of a “zones blanches” exploration for abandoned IGN (National Geographic Institute) detected areas in Ile-de-France. His seventh opus, entitled La Conjuration (published in 2013 by Fayard), was written through blood, sweat and tears, while listening to 80’s punk synthesizers. The story recounts a cult’s journey and navigation through secret Parisian passageways. From “zones blanches” to modern religious cults, Vasset’s fictions are non-standard and go beyond literary genres; molded by reality, their author calls them “exofiction”. Press reviews suggest that Vasset’s unusual style of writing may be forging a new genre of geographical literature.

Dr. Inke Arms (born 1968, Duisdorf/Bonn) is an independent curator and author. After having held positions at Humboldt University in Berlin, Hochschule für Grafik und Buchkunst Leipzig, Hochschule für Gestaltung und Kunst (HGK) in Zürich and Piet Zwart Institut in Rotterdam, she has been the artistic director of Hartware MedienKunstVerein since 2005, a contemporary art space in Dortmund, Germany. She has curated numerous exhibitions, particularly in the field of media art. Her publications include studies of the Slovenian NSK movement.

Marta Ponsa is an Spanish art historian currently living in Paris. She worked for 8 years at the Department of Photography and Visual Arts of the Fundacio "la Caixa" in Barcelona as coordinator of the catalogues, exhibitions and audiovisual production. Since 2007, Marta Ponsa has been Head of the department of Artistic Projects and Cultural Activities, which is in charge of Jeu de Paume' s on line exhibition space "Espace virtuel", public programs (performances, symposia, talks and seminars and cinema program) and "Le Magazine", Jeu de Paume's webzine.