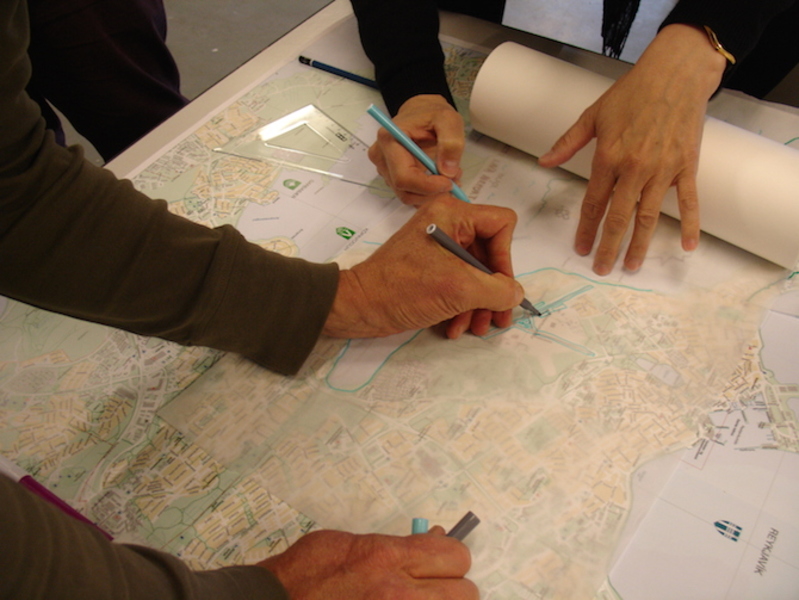 In this workshop participants learned about simple ways to modify human environments of all shapes and sizes, through a few case-examples like guerilla/community gardening, occupy camps, tree squatters, caravan squats, or multi-purpose furniture. They were invited to thinkof a space they want to "recycle" and draw or describe their design and everyone would help each other to complete it in language descriptions, drawings, and 3d models, also computer designs. we would use transparent paper, clay, dough, and "trash" materials.

Protocol: The radio reciever, the simultaneous blind portrait drawing, and the recycling spaces workshop ran simultaneously in the same large room which allowed the 15 participants to change at any time. I started by asking the participants to tell me about a space, any space public or private, they would like to improve. At the start no one had any space, so i presented the space in reykjavik that i wanted to "recycle". In the case of this workshop that turned out to be important, since no one had a space they had thought to recycle at the start. Then, later, after I had presented the space I wanted recycled, and we had created some visions for it; the participants did come up with some other recyclable spaces. So I presented the reykjavik local airport(not the international airport, which is 30 km away from downtown) as a space in need of recycling. It lies right in the center of downtown and divides the city. The beautiful part about recycling spaces is that everyone can easily participate in everyone else's designs and ideas. I had bought a large map of the downtown and placed tracing paper over it and with colored felt pens quickly sketched in the public park, community and individual gardens over the area of the airport, talking all the while about what i was drawing and also labeling the features and areas in the sketch. A lively discussion ensued about the history of the airport and that it, in fact, used to be allotment gardens for the citizens before the british army took it over during world war 2. One participant also knew about a professional architectural design competition for the area of the airport after it is shut down. These all covered the airport with apartment housing. One participant(sorry that i can't remember anyone's name anymore) moved the airport out onto a man-made island in the sea bay bordering the airport. After about an hour of discussion and sketching we hung the design ideas, which were all done by sketching with colored felt pens on tracing paper over the map, on the wall. It is important to hang the results next to each other on the wall because it makes a different impression than seeing them on the table scattered about. it is also a the evaluation phase of the workshop. I had also bought modeling clay for 3d ideas, which was used for fun, but not in the design process. more time would have been necessary for this, but still it helped everyone to have fun and loosen up. I think that it was also important to have quick, easy to use materials and tools. At the end the consensus seemed to be a park and gardens would be best. Then, one guy sketched his private home and wanted to redesign the back yard. This ended up being more of a 1 on 1 consultancy, but some participants watched us with interest.

Resources needed: very simple - rolls of 30 cm or wider tracing paper, pencils, colored felt pens, modeling clay or dough, rulers, square triangles- either 30, 45 or adjustable degrees, compasses(or pin and string) long bladed knives(to cut the clay straight. kitchen knives will do), a couple of rolls of tape, templates for circles and furniture(optional), an expert with spatial planning skills(optional but recommended). cardboard, foam board or ca. a3 area X 3-10 cm thick styrofoam or blue foam can be used instead of modeling clay/dough, but then an exacto knife, a metal ruler, and a hot-wire cutter for the styro or blue foam is necessary.

Technologies: none or optional - design programmes like auto-cad archi-cad etc. but i see these as more of a hindrance than help. It was a cheap workshop to produce - 50 euros of materials for 15 people