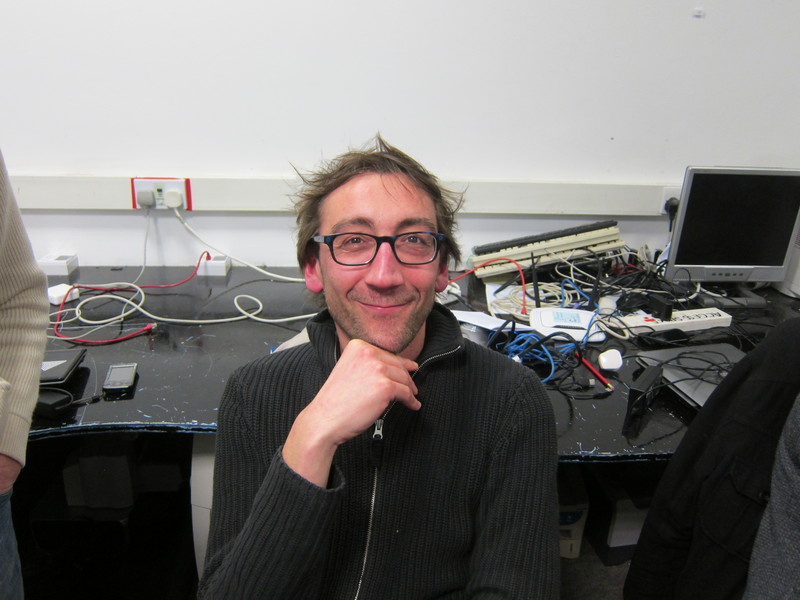 > Give yourself a title, some kind of imaginary title, something unconventional that describes best your role in the organisation?
Organiser of the Entropy

> What kind of animal is your festival and why?
A fawn, because their evolution is linked to a community, a family in a cooperative way, which contradict the image we have of darwinism. This is true also about their relationship to other species.

> What was the spark that inspired your festival?
Mainly a collective desire, because some people where started to collect works and we wanted to create a context for these works. We did not imagine to make a festival but it slowly grew into a festival.

> Why are you doing this and not something else with your life?
It is because I hope and I think it is the best way to save the humanity.

> How would you describe your festival to your grand-parents?
It is a nice meeting of all kinds of people. Artists and people who do not think they are artists but in fact are. We produce concerts and things to see, also there are moments when we exchange knowledge. It lasts several days, it is both a gathering and a festival. Now we try to avoid the idea of proposing artistic content to the public and instead focus on creating a link between the artists and the public, following the idea of co-fabrication, involving people as much as possible in the content of the festival, and also with practical things.

> What would you have in an organiser's survival kit?
Food, a few instruments to produce things together, like a small device that would contain the whole internet, also one to produce beers.

> What is one thing that you do wrong?
There are so many. Maybe doing things myself someone else should do, to save time.

> What is a successful festival according to your own standards?
It is when we increase the fertility rate of our city and push love through bits into the network and computers.

> How can one contribute to your festival?
People can propose things for the programme via our open call, they can also help clean the toilets on sunday, prepare food, host people, communicate the event to people who would not otherwise hear about it and help bring together a diverse audience.

> List a few events that you find inspiring
Pixelache
Apadolou

> What would you like to open-source from your festival?
Ideally everything. This year we published our funding applications and our budget and the process of event planning, the content which everybody is invited to propose and the communication process. The visuals were made collectively following the cadavre-exquis principle. We publish and explain the budget to the public.