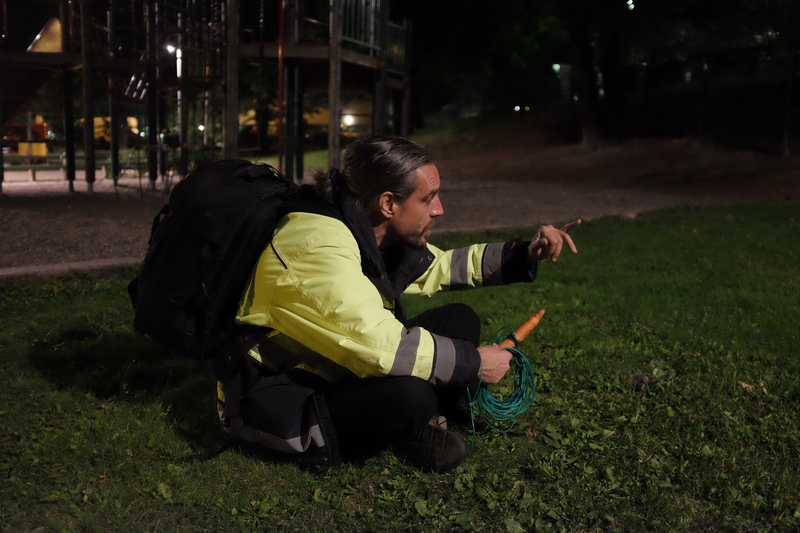 > Give yourself a title, some kind of imaginary title, something unconventional that describes best your role in the organisation?
Workshopologist

> What kind of animal is your festival and why?
A monkey, because it is playful and jumps around, and it is almost human.

> Why are you doing this and not something else with your life?
Because I like to bring people together

> What was the spark that inspired your festival?
There were the inspirations: Interactivos in Media Lab Prado in 2009 (www.medialab-prado.es/interactivos), Cellsbutton festival in Indonesia in 2009 (www.ix.natural-fiber.com/cellsbutton/) and Pixelache Festival in 2011 (www.pixelache.ac/festival-2011/).

>How would you describe your festival to your grand-parents?
At this festival we bring a lot of interesting people together from all over the world and it is kind of temporary school, where everybody from the city can come whenever they want and learn some interesting things about technology. Most of the people who come have interesting teaching and knowledge sharing and different artistic expressions.

> What would you have in an organiser's survival kit?
Lots of coffee, a notebook, a mobile phone with the important numbers inside.

> What is one thing that you do wrong?
I yell at people.

> What is your relationship to other organisations in your context?
I have good and bad experiences. It is kind important to choose your partners wisely. Festivals that come from very enthusiastic open culture environments instead of established institutions / partners. It is about authenticity.

> What is a successful festival according to your own standards?
When something remains, sustainably, on the local level, that inspired new projects to be started, initiated and at the same time local people and international people keep connected on the long term, and having loads of fun. It has to be fun! But if you run a festival, you have to consider it involves a lot of physical running.  I have an approach of the festival as a laboratory (more practical part) and as performance (more ideological / culture part).

> What is the main thing from festival production you think should be open sourced?
The experiences should be shared more from the festival organizers, also self-critical post-reflexions. 'We wanted to do it but then…' We had this idea of a retreat of festivalology, 6 months later, but it did not happen. You can have a critical discussion about the festival itself and its format in the form of a panel during the second half of the festival. I saw that at Share festival in Belgrade (http://www.shareconference.net/sh).

> What collaborative tools / interfaces do you use? Do you have your own server? Have you developed your own specific tools?
It's cool to have people to cook together as well. People cook together, people share apartments instead of hotels, there happens the unprogrammed part of the festival (it is also cheaper!). Surprises are important as well (people have to improvise). If you have someone at the festival who is already doing a performance, you can ask them to improvise a lecture the following day. You can push people out of comfort zone and achieve a different productive/collaborative environment.

> Are you expanding, contracting or trying to keep the same level of activity?
I don't want to expand, keep it small. It is easier to have a more experimental approach if it is small.

> What tools have you developed for allowing ongoing learning?
We don't use them so often, but sprints are very good to learn and come up with new reflections and ideas for example.

> Name a problem and a practical solution to solve it
I had the trouble that i was working in a foreign land. I got extra help from people I was used to working with. That was helpful.

> How about documentation & archiving? How is this part of your work and how is it distributed?
I am interested in this but usually fail. You have to plan this documentation phase financially & timely. I am still working on it.