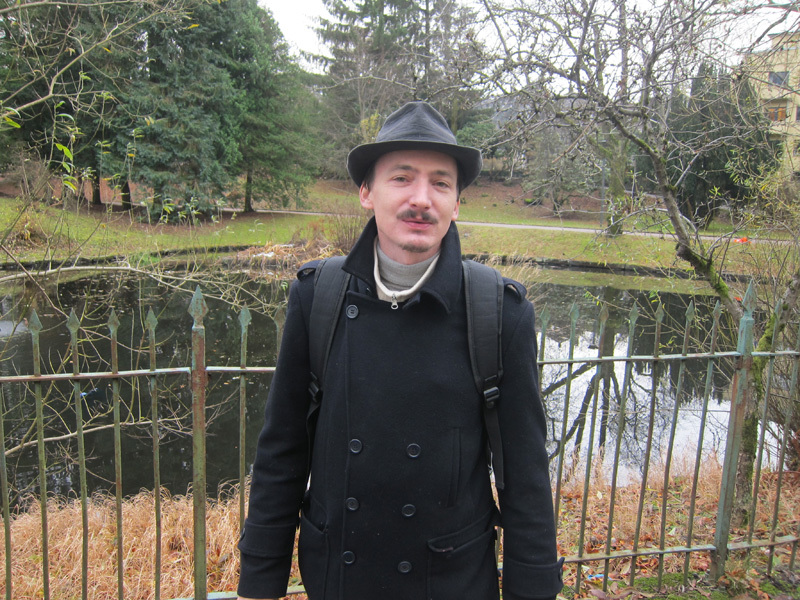 > Give  yourself a title, some kind of imaginary title, something  unconventional that describes best your role in the organisation?
«œuvrier», a word blend of «œuvre» (artwork) and «ouvrier» (worker). So «artworker» suits well to what I am doing.

> What kind of animal is your festival and why?
As James Wallbank already chose the bee, I will take upon myself the obscure side of what we are doing and pick the mole: digging tunnels underground at night, regardless of fences or borders…The reference also has another meaning in French, less relevant here and more pejorative, that of a of 'sleeper agent'.

> What was the spark that inspired your festival?
Visiting Pixelache Helsinki was the starting point. I saw a festival work with a specific community of people interested in both art and technology, but from a critical perspective, far from pretending to reach a wide audience or featuring famous media artists. The key rather was to be inspirational, to act as a go-between and facilitator of emerging projects or ongoing processes… Attending a festival that was at the very beginning of many art projects rather than at the end, that was the spark.

> How would you describe your festival to your grand parents?
When telling about Mal au Pixel, I am frequently asked: 'what's do electronics have to do with arts?' I usually give a few explicit examples of projects, explaining that artists today are as much interested in media of communication, electronic devices or in programming, as their predecessors were in foundry, photography or any material for creation.
Then, I also draw attention to the specificity of this digital realm, where an artwork is not solely a depiction of our world and thoughts anymore, but can now affect our lives in a tangible manner.
When artists use new technologies, develop real scale prototypes, efficient codes and programs, new patterns of information, they do affect our social relationships, open our minds, unveiling the hidden truth of the «Brave New World»...
That is why we are also promoting the use and development of Open Source solutions, available for anybody to adopt, modify and contribute to.

> What would you have in an organiser's survival kit?
A leatherman knife in the pocket, several A/V adaptors and regular cables! But the most important to me is the human relationship: accompany the artists, look in detail at what makes the artwork, pay attention to all the aspects that are part of hosting a project... And avoid saying 'no, this is impossible…', because one might be talking to someone who has hacking skills and will make it happen!

> What is your relationship to other similar organisations in your context?
We have always been trying to involve other organizations in Mal au Pixel, promoting their activities as part of the collaboration as well. We also cooperate with institutions, as long it is useful to the project holders we work with and helps to spread the word.

> What's one thing that you do wrong?
I am bad in earning my living from this work.

> What is a successful festival according to your own standards?
First, I'm happy when every project works as expected. But I am especially proud when a project develops further, for instance through new collaborations, thanks to the fact that we brought people together in the first place.

> List 3 other events that are inspiring you
Maker fairs, camps, self organized meetings that disrupt the usual organizational methods and create new formats for public meetings. I also like the 48h non-stop events Economie.0 and Politique.0 that happened in Paris, led by Kevin Bartoli and the Incident.net collective.

> What's your favourite story about your festival?
There are plenty of small and big stories...  from the Indonesian collective Honf growing an open source yeast for alcohol production, to HeHe's Nuage Vert that failed with local policy makers. Experimental practices often lead to unexpected situations, especially when dealing with authorities. Three years ago for two days we tried to retrieve Jean Katambayi's sculpture from French customs. It was almost impossible because the cardboard sculpture - containing regular electronic devices - was not «CE» certified! We finally proposed to cut out the wall plug wire and that did the trick!
I also have a great recollection of simple works that drove people crazy, just because of funny interaction, such as Erik Sandelin's «Four Ophone» or Motoroke lowtech moto racing game that was forcing you to scream inside an helmet to win the race...

> What are the benefits of being a festival organiser?
Absolutely no benefit. Not even fame. It is just a commitment in art and with different human communities that makes you feel that you are acting for the future. In a few years, when my kids will ask me about what I was doing before the digital dictatorship, I will tell them few things...

> How can one contribute to your festival?
Depending on who you are: if you are an artist, send info about your work. If you are an organization, we would be happy to take over your venue for a few days. If you are an institution, please give us some production resources! But if you are just curious about art, technology and conscious about the future of our digital civilization, you are welcome... it is free!

> What are the biggest changes in the history of the organisation?
In the year 2009 the festival left Mains d'Œuvres, independent art center in St-Ouen - where I was running the visual arts program. Since then the festival has been produced by Art Kill Art, non profit organization and has taken place in various venues. So we have changed methods, locations and went for a more radical approach in the interactions between arts, technology, and society.