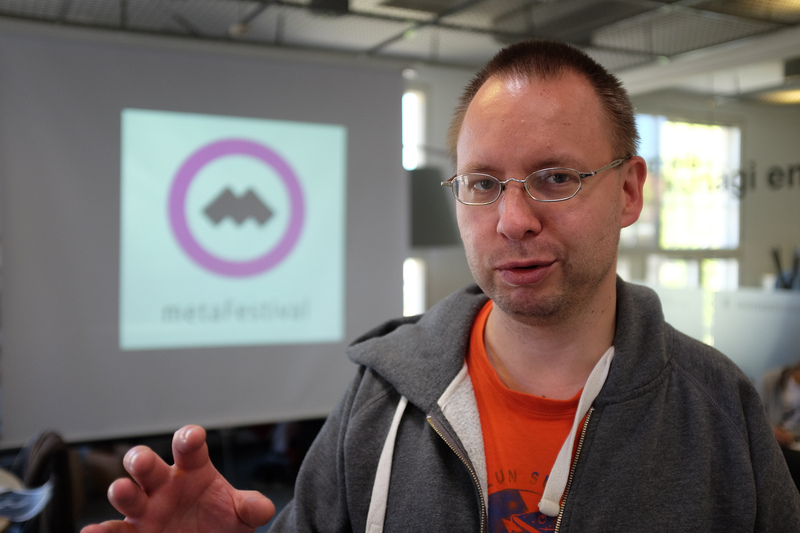 Interview of Pekko Koskinen, conducted in Helsinki (FI) on 13.2.2014
Organisation: Reality Research Centre / www.todellisuus.fi
Festival: Doesn't organize his own festival but has been collaborating with different festivals including Baltic Circle / www.balticcircle.fi) and Pixelache / www.pixelache.ac.

> Give yourself a title, some kind of imaginary title, something unconventional that describes best your role in the organisation?
I could steal a title. In terms of a festival, I would call myself a syntax, creating syntax for a situation or for something that could happen. I create pieces, put them on the table and move them around to change the situation. Or cultural player, someone who plays with culture. It's about an attitude.

> What kind of animal is your festival and why?
It is an amoeba. A festival has a form that deforms constantly. When you step into a festival office for the first time, are you in the festival? Probably you don't feel you are. But if you walk out of the festival, and go somewhere to a bar where you find festival people. Would you feel you are still in the festival? Many would think that yes. So an amoeba is an image of the changing presence of the body of the festival.

> Why are you doing this and not something else with your life?
Actually I am not doing this thing. I am doing the thing X not for its own sake but because it is an interesting move in a given situation. Doing something with a festival connection is not for its own sake but it is for the sake of the effect you can achieve through the festival framework.

> How would you describe Pixelache Festival to your grand-parents?
I would describe it to different grand-parents in a very different manner. I will pick my grandfather from my father's side. It is an event that gives you the right to behave different simply because it exists. In this case, the difference has to do with activating yourself in an organized manner towards the culture we have. If culture had sculptors, this would be a festival concerned with the exchange of new sculpting tools and new ways to chip off pieces of the stone that is culture. There are a lot of devices but they are utilitarian generally.

> What would you have in an organiser's survival kit?
Instant people powder, just add-water type of thing. Cause people are the key both inside & outside. A phone that always gets answers, somebody would always pick up on the other end. Some weather-control device. And a handbook of festivals, in terms of how they are made. I don't think such a book exists but it should

> What is one thing that you do wrong?
Hopefully everything. What matters is the style of 'wrong'.

> How do you create situations for people to participate in your event?
It is a question of realizing that you are doing it all the time and then learning from yourself.

> What is a successful festival according to your own standards?
A festival that makes people feel different when they come out of it.

> What is the main thing from your art or from your art of organizing you think should be open sourced?
It has something to do with creating festivalisation in situ.